A ‘wicked problem’ that is only getting worse Food poverty is a growing issue in Wairarapa.

The number of food parcels being handed out is hitting record numbers and more and more individuals and whanau, including working families, are accessing help through government grants, agencies, and charities.

So far, as part of Midweek and Planalytics’ Hand to Mouth series, we’ve covered what food insecurity is, and the barriers contributing to people going without.

We’ve also looked at the many volunteer groups and organisations addressing food need in our community.

In this article we’ll delve deeper into the findings of the research conducted by Planalytics last year.

Planalytics, a Greytown-based research consultancy, was commissioned by Connecting Communities Wairarapa and funded by Lottery Grants Board Te Puna Tahua to produce the Waste Not, Want Not: Food Insecurity in Wairarapa report.

To get an understanding of the extent of food poverty in Wairarapa, the firm interviewed people active in the food security network.

Those partaking in the interview represented a range of roles, from food rescue to food distribution, and social services engaged in identifying and addressing the issue in the community.

Planalytics identified it was possible that interviews with clients – people experiencing food poverty – could be carried out as a second stage of research at a later date, if funding could be secured.

The research has a dual purpose – to understand the scale of community need for food at a local level, and to inform new initiatives so their programmes and projects are effective.

Food insecurity was defined as occurring “when the availability of nutritionally adequate and safe foods, or the ability to acquire such foods, is limited or uncertain”.

Planalytics’ research found that there was very little government guidance available regarding how to address food insecurity in Aotearoa.

But this could be down to the complexity of the issue.

Food insecurity has been describing as a “wicked problem” by Kore Hiakai, a collective of social service agencies including city missions, and is a factor contributing to people being “trapped in a state of constant hardship”.

The complex nature of the problem means there’s a complex response involving government and for-profit agencies, as well as charities and community groups.

In Wairarapa we have more than 29 organisations addressing food need.

Planalytics spoke with 25 participants from 18 of these agencies and reviewed available data.

They also analysed data from the Ministry of Social Development, and examined media reports and journal articles.

It was hard to quantify the extent of food poverty in Wairarapa, largely due to differing data collection methods among agencies – an issue that is apparent across the country.

It was also noted that not all people experiencing hardship would go to food agencies to ask for assistance, and therefore data collected would not be painting a full picture of the problem.

Available data from the region’s food banks showed a steady increase in demand for food parcels, with monthly demand in Masterton rising from 199 parcels in 2015 to 300 in 2018. 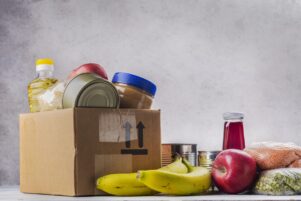 Food banks have seen an increase in the need for food parcels.

“We have seen the people who need help creep into middle-class working families, where mum and dad are both working and coming in for food. It’s a very sad situation.”

Planalytics said, “many interview participants had first-hand experience of assisting people and whanau experiencing food insecurity, and some felt that people presenting with that particular need had increased in recent years”.

Some interview participants reported a spike in older people experiencing food insecurity, with one from a government agency who worked with people over 65 saying “the need for food among clients aged 75 and older had dramatically increased from 12 months prior”.

They added that many asking for assistance “really have nothing”.

Most interviewees anticipated that food poverty would remain an issue in Wairarapa for the following reasons: the high cost of living, the lack of public housing in Wairarapa, and low wages and benefits not keeping up with living costs.

It is expected that food insecurity will continue to increase among the region’s older population.

Next time: We’ll take a closer look at what the food banks and Waiwaste Food Rescue are doing to help.