A study in construction Pupils, staff, and trustees gather for the sod-turning ceremony at Greytown School on Tuesday. PHOTOS/TOM TAYLOR

Primary pupils will have front-row seats to the construction of nine new classrooms at Greytown School. Greytown School board of trustees chairwoman Jane Cooper and principal Patrice O’Connor turn the first sod at the construction site.

Principal Patrice O’Connor and board of trustees chairwoman Jane Cooper turned over the first soil at the construction site on Tuesday morning.

Papawai Marae representative and former Greytown School pupil Herewini Ammunson said a karakia for the site and the people who would work on it.

“The purpose of the blessing is to clear the space spiritually… so that a mauri, or lifeforce, will go into the ground where the building will be built,” Ammunson said.

St Luke’s Church pastor Harry Newton added his blessing and prayed for all pupils who would become a part of the new space.

O’Connor said the start of the build had come after a process of more than four years.

“With a lot of hard work and research, we were able to prove to the Ministry [of Education] that we needed a new building.”

Builders from Greytown company Holmes Construction would replace one of the school’s original buildings.

O’Connor and the board of trustees had also lobbied the ministry to consider Greytown for additional classrooms.

Greytown had been identified as a high-growth area and faced a real risk of overcrowding at its school.

“We’re trying to get ahead of that curve,” Hipkins had said at the time. 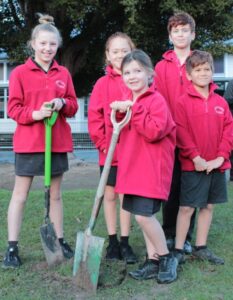 Greytown School pupils are excited about their new learning spaces.

Cut-outs in the fencing around the construction site would allow pupils to check in on the build’s progress.

“Holmes Construction is really keen to work with our kids, and at different stages to have children come in and have a look.”

In stage 1 of the construction, two classrooms would be relocated and renovated, with new decking and an outdoor wet area.

Five new classrooms would replace the school’s original senior building, which was more than 100 years old.

O’Connor said the building had been around since before the 1918 Spanish flu.

In stage 2 – due for completion in 2023 – the old senior building would be removed, and four additional classrooms would be built to cater to the school’s rapidly increasing roll.

Builders would unearth a time capsule buried in a rose garden outside the senior building.

Some of the builders had contributed to this time capsule as pupils at Greytown School 30 years ago.

Present-day pupils would make a new time capsule and place it alongside the old capsule at the grand opening of the new senior building.

“It’s a monumental moment in the history of our school because these buildings will serve thousands and thousands of children to come,” O’Connor said.

“It will be a hub of our community, and it will continue to ensure that the heartbeat of Greytown School is thriving.”

“Effectively, Greytown will have state-of-the-art classrooms in the next three years, with three-quarters of the school brand new.”