A sporting month of misery Quinn Tupaea at All Blacks training in Dublin, Ireland, as coach Ian Foster looks on. PHOTOS/GETTY IMAGESDave Rennie, seen with Wallabies’ Nic White, is likely to be lost to NZ Rugby for good.

Don’t you just hate it when there’s a weekend when all the teams you follow lose?

One weekend is bad enough, but how about a month of it?

The All Blacks whimpered to two losses against Ireland and France to end their northern tour on a low. Once again, the Black Caps were being psyched out and outplayed by our transtasman cousins in a crunch match.

The Black Ferns were short of a gallop against England and France and Wairarapa-Bush were out of their depth in the Heartland Championship.

To top off the month of misery, the horse you have a minuscule share in is still running, and Manchester United fall to ignominious losses to sworn enemies Liverpool and Manchester City, before being out-manoeuvred by the Hornets [Watford], bringing a stinging end to the management tenure of one the club legends and nice guys Ole Gunnar Solskjaer.

I know the ‘scum’ [as their many detractors refer to them] losing will be sweet music to many supporters of other clubs, but to us passionate fans, it’s a cacophony of noise by an out of tune orchestra.

It reminds a bit of the All Blacks and NZ Rugby, doesn’t it – an out-of-depth coach in Ian Foster, and manager, in Solskjaer’s case, blindly supported by their employers, who give the best impersonation of a stationary ostrich in the desert showing its backside.

Eventually, the ‘Red Devils’’ board lifted their collective heads out of the sand and sent Ole on his way with a nice farewell card and golden handshake.

Will the NZR board show finally similar intestinal fortitude and toss out Foster and sidekicks, giving All Blacks fans a welcome Christmas present?

Unlikely, because like a retailer in a covid-19 lockdown, the All Blacks coaching team is a closed shop.

Foster promised continuity when he took over from his old boss ‘Shag’ [Sir Steve Hansen], and he delivered in spadefuls.

The ABs continue to struggle against teams that showed a bit of muscle and steel, a la the 2019 World Cup semifinal against England, the Springboks in both tests this year, Ireland, and France.

Looking at Foster’s credentials, one wonders how he got the top job. As coach of the Chiefs from 2004-11, and often with an All Black-laden squad, he failed to win a Super Rugby title. His best results were losing finalists to the Bulls in 2009 and a semifinal loss to the Brumbies in 2004. 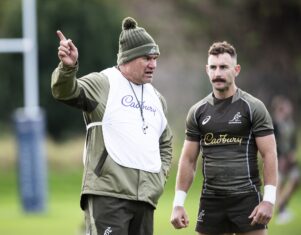 Dave Rennie, seen with Wallabies’ Nic White, is likely to be lost to NZ Rugby for good.

Only when Dave Rennie took over in 2012 did the Chiefs finally salute the judge, repeating the effort in 2013.

Rennie saw the writing on the wall early on that he didn’t fit the ‘yes man’ mould that NZ Rugby wanted and packed his bagpipes for Glasgow Warriors before picking up the didgeridoo and heading to Australia and the Wallabies’ poisoned chalice.

On an aside, wasn’t it refreshing to see Rennie rightfully get stuck into the officials for the “horrendous” refereeing in the one-point loss to Wales last weekend?

Unfortunately, the innovation of the Dave Rennie boat has sailed and he’s unlikely to ever be at the helm of NZ Rugby’s flagship.

Undoubtedly, the beating of the drums for Foster to be dumped in favour of champion breakdancer Scott Robertson will grow louder and louder, especially from Crusader country. But I’m not convinced.

Too many of his favoured sons have shown they can’t necessarily take the step to the very highest level.

Looking good in Super Rugby or against the ‘Woeful Wallabies’ where there is ample space is one thing but repeating that against the stifling defence and power of the Boks, Irish, English, and French is a different proposition.

It’s too early to spell doom and gloom on the next World Cup because there is enough time to save the rudderless ship, although I have the same gut feeling as 1991, 2003 and 2019 — that the coaching crew are being out-thought and too many of the commander’s good mates are dog-paddling at the end of their careers.

Maybe a disastrous 2023 championship is needed to sink the Foster ship once and for all, finally.

But in the meantime, the All Blacks mojo and mana are desperately clinging to a slowly deflating life raft.

On the bright side, things are looking up. Man U won on Wednesday [yay!], and now all we need is our little horse to bounce back to form.