A shake up in risk profile A large slip along Te Parae Rd, near Masterton, closing the road in September 2018. PHOTO/FILE

New research has emerged detailing the risk of a massive earthquake at the southern end of the Hikurangi Subduction Zone, which runs through Wairarapa, as residents prepare for
“the big one”.

A new study, led by Charlotte Pizer from Victoria University of Wellington, used prehistorical tsunami deposits at Lake Grassmere in Marlborough to get insight into past earthquakes.

The project is a joint study among GNS Science, Durham University, and VUW.

New data combined with tsunami modelling techniques has shown the probability of an earthquake of at least magnitude 8 on the southern end of the Hikurangi Subduction Zone in the next 50 years is about 26 per cent.

Seismo City seismologist Dr Caroline Holden said in the event of an 8.9 magnitude earthquake, Wairarapa should expect to see widespread landslides on steeper slopes and liquefaction in silty and sandy low-lying areas.

“In this scenario, we expect large uplifts of three to four metres along the South Wairarapa coast.”

East Coast Lab, a collaborative programme bringing together scientists, emergency managers, experts, and stakeholders across the East Coast to learn about the hazards of the subduction zone, said it was not particularly well grasped. 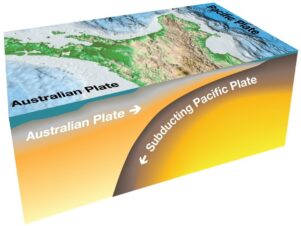 A picture of the Hikurangi subduction zone where the Pacific tectonic plate dives under the Australian Plate. PHOTO/ GNS SCIENCE

“The Hikurangi subduction zone is poorly understood, yet potentially the largest source of earthquake and tsunami hazard in New Zealand.”

It said subduction zones were a type of fault and are responsible for the largest and most powerful earthquakes and tsunamis in the world, such as Sumatra 2004, Chile 2010, and Japan 2011.

East Coast Lab said it was known that the Hikurangi subduction zone could produce large earthquakes and tsunamis – and that these events have occurred in the past.

“However, we don’t know how often these earthquakes tend to happen, nor do we know how large they can be.”

Kate Clark from GNS Science co-authored the study and said this was the first-time scientists had been able to come up with a probability for large earthquakes for the Hikurangi Subduction Zone.

“Geological records like this are essential for assessing the risk of earthquakes and tsunami, but they’re difficult to obtain at transitional plate boundaries like this,”

The evidence showed that large earthquakes on the subduction zone could generate large tsunamis that were likely to impact the lower North Island and upper South Island.

“This research helps us better understand these large fault systems and the likelihood of tsunamis produced by the faults – and the more information we have, the better we can inform local communities about how to be prepared and resilient,” Clark said.

Dr Jamie Howarth from VUW, who also co-authored the study, said knowing more about the risk of the Hikurangi Subduction Zone was essential.

“Knowing more about the risk is a really good thing because it provides the opportunity to better prepare our communities and infrastructure which should now be a priority.”

Core samples of the sediment layers at Lake Grassmere showed unusual shell layers, indicating deposits from several large-scale tsunamis, which were caused by large subduction earthquakes in the past 2000 years.

The lake sits on the transitional plate boundary between the Marlborough Fault System and the Hikurangi Subduction Zone.

The subduction interface lies 25km below the site, with active faults in close proximity.

“Geological records like this are essential for assessing the risk of earthquakes and tsunami, but they’re difficult to obtain at transitional plate boundaries like this,” Pizer said

“This is a rare opportunity to gain knowledge from past earthquakes and tsunami sequences – helping us to best prepare for the future.”