Rhada McGlashan gets a team hug from some of her Douglas Villa players. PHOTO/SUPPLIED

National recognition for a local’s achievements in junior football.

Radha McGlashan is the toast of the Wairarapa football community after winning the NZ Football McDonald’s Junior Coach of the Year.

McGlashan was last week named the Capital Football junior coach of the year, which put her in line to win the national junior coaching award.

Finding out that she had won the national award came as a complete surprise for the 22-year-old, who was lured to a specially organised training session on Wednesday with some of her Douglas Villa players, which she believed was in connection to her winning the Capital Football award.

“Capital Football came over to interview me and make a video of my kids training,” said McGlashan.

“I thought it was purely because of me winning the regional award, and during the interview part they showed a video compilation of the kids from my teams saying why I was a good coach, and why they like me as a coach and then at the very end they had Danny Hay [All Whites coach] saying that I had won. 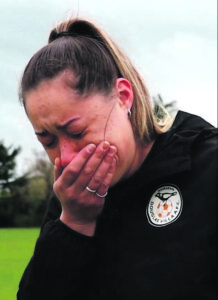 “I was very teary through the whole thing, with just what the kids were saying, and then my kids team came over with the trophy because Katie Barrett [Capital Football] had gone and got it out of the car, and they came over and gave it to me and gave me a hug.”

McGlashan said the kids were as excited as her, although some of them were a bit confused what it meant, but when they realised, they just kept calling her ‘Coach of the Year’.

McGlashan coached two teams, the Douglas Villa 11th grade Titans, and 12th grade Hotshots teams, juggling her work shifts to fit in her coaching commitments at Pak ‘n Save supermarket, and more meritorious given that she has no family connection with the teams.

Her love for football was nurtured from a young age by grandparents Dennis and Robyn Tapp, who ran school holiday coaching programmes for junior players, where she learnt the philosophy of the kids having fun and playing fairly.

“I prefer the kids to be respectful and care for other teams. For the last few years if my team was winning by at least five goals I’d make them pass the ball, so I tell them that if they’re leading by five goals, they have to pass at least five times before they can score.”

McGlashan said that she adopted that policy because she knows what it’s like to play in and coach teams that regularly lose by big scores and “it sucks”.

McGlashan intends to continue coaching in 2022.

“I’ve been asked if I could take the JPL [junior premier league] team which travels over to Wellington every second weekend. I’m not too sure if I want to do that yet, but I definitely want to continue to coach.”