A passion for people and the past Gareth Winter is retiring from the Wairarapa Archive. PHOTO/SOUMYA BHAMIDIPATI

Wairarapa legend Gareth Winter has retired after more than three decades at the Wairarapa Archive, but the historian says he still has a passion project or two in the works.

Multiple events have been held to commemorate Winter’s retirement and contribution to the archive, which began in 1997 with seven years volunteering before 24 years of employment.

As an historian, his role was to help people connect the dots. He compared it with neurons forming connections in the brain.

The archive’s role was to help a community to understand its past, Winter said.

“I’ve taken it to be our job to tell those stories.”

He gave the example of a story he had written for the Times-Age about an unmarked headstone.

“We were contacted by a lady who was so moved by the story that she’s arranged to have a tombstone for him.”

While many thought of an archive as a place for organisationally-obsessed oddballs, Winter said that was only part of the picture.

“We’re only doing that so we can use the information,” he said.

“It’s about getting something and arranging it in such a way that it can be easily understood. It’s about making sense of the chaos.

“That’s a very satisfying part. I don’t think most people using an archive understand how much archivists like doing that.”

Wairarapa Archive had seen an “exponential increase” in visitors during Winter’s time, especially once it moved to its Queen St locations.

He estimated while it had received about 200 people a year on average before the move, about 2000 people now visited the archive yearly.

“Most places in New Zealand, if you went and said ‘the archive’, people would go ‘huh?’. But here, people know what it is,” Winter said.

“Part of the secret of our success has been our great relationship with the Times-Age.

“There seems to be more interest again in our local stories.” 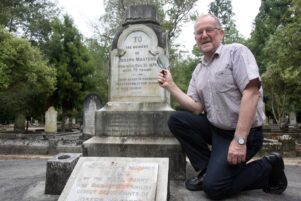 Gareth Winter has made it his mission to share Wairarapa’s history. PHOTO/FILE

Winter’s interest in history was piqued when his late daughter Lavinia researched the Maori Peace Monument in Queen Elizabeth Park as part of her Year 12 schooling.

“The dates and things didn’t tie up,” Winter said.

“I thought, ‘that doesn’t make sense’, so I thought I’d dig a little deeper and see what it all means.

“I’d been interested in researching histories before, but I’d never dug in as deep.

“And here I am still digging,” he said.

Winter had previously worked in the meat industry, as a labourer, and in horticulture. He had trained at Wellington Polytechnic as a journalist.

“I said when I was 17 that I didn’t write because I wanted to, I wrote because I had to. I would’ve been talking about poetry then, but the same thing still applies.”

Winter has written nine books about Wairarapa’s history and said he still had more stories to tell. The archives had published 32 books during his time.

The first one had come about almost accidentally, Winter said, after multitudes of Masterton Intermediate School pupils visited the archive as part of a school-wide heritage month to research Masterton street names.

“I get huge pleasure being able to help people. I think I was born with a help people gene, so I think that’s what I’ll miss most,” Winter said.

At a Masterton District Council meeting last week, mayor Lyn Patterson acknowledged Winter’s “immense” contribution to the region, stating the Wairarapa Archive was “one of the most respected in the country”.

However, in typically humble fashion, Winter said the best feedback he had ever received was a letter which exemplified one of his basic beliefs; that everyone’s research was important.

“The one that I love the most [said], ‘Everyone was treated the same – the university professors and the year 6 students were given the same amount of help and time’.”

As well as spending more time with his two-year-old grandson in Palmerston North, Winter planned to continue volunteering on some projects for the archive.

“We’ve been working on ensuring that the Masterton Cemetery database is correct,” he said, saying there had been many mistakes made when the information was first computerised from written records.

He planned to archive some collections of personal interest, and would also continue to work on some Waitangi Tribunal papers.

“I’d like to get a better handle on making them available for the public,” he said.

“I have lots of writing projects as well – I’ve still got books in me.”

One particular book would be based on his experience walking the length of the Ruamahanga River.

His position at Wairarapa Archive would be filled by Liz Conway, who Winter said would bring strengths in film and video.

“I’m very lucky to have been paid to do what I love,” Winter said.