A ‘Grand’ adventure for Noelle From an “overwhelming Catholic” town in Ireland to “sparkling” multicultural Auckland, from nervous late night radio host to award-winning podcaster, from inter-generational trauma to reckoning with her family’s past – Featherston’s Noelle McCarthy has been on quite the journey. 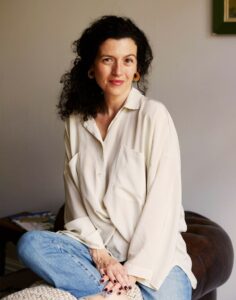 Book lovers will get to hear more about this journey at next month’s Featherston Booktown – where McCarthy will be giving a presentation about her newly-published memoir “Grand: Becoming My Mother’s Daughter” (Penguin 2022).

McCarthy will be presenting alongside Megan Dunn, of Wellington, writer of the memoir “Things I Learnt At Art School” – sharing the “ordinary and bizarre” characters and events within their books, and the process of committing them all to print.

At the heart of the memoir is the author’s relationship with her late mother Carol – a woman she describes as simultaneously “funny, charismatic and generous; and angry, vicious and hurt”.

The book also delves into Carol’s story: her deeply religious upbringing and traumatic young adulthood, the legacy of which had an acute impact on her children.

The title of the book, McCarthy said, sums up the mother-daughter relationship: “grand”, common Irish slang youth, can be used to describe something that is both “very good” and “a bit average”.

McCarthy, now mum to five-year-old Eve, began writing “Grand” in 2020, after having returned to Ireland to spend time with Carol, who had been diagnosed with terminal lung cancer.

While “Grand” is a keenly personal reflection of her life to date, McCarthy said its themes have resonated strongly with New Zealand readers – something she admits surprised her at first.

“Writing ‘Grand’ was an opportunity to take stock of my own life – but I don’t think I realised just how universal it is to have a parent who challenges you,” she said.

“People who have read the book have told me how much it reminds them of, for example, their relationship with their father – or their grandmother or daughter.

“It’s the relationships with those we’re closest to that can be the most complex – and can shape our lives in the most profound way.

“Plus, I think women my age appreciate all the 90s references in the book: listening to Tori Amos, Bjork and Oasis, wearing Body Shop perfumes, and sneaking out with the booze we got our older sisters to buy us.”

McCarthy was born in raised in Cork, Ireland’s second largest city – and grew up in a staunch Catholic community, still struggling to navigate the taboo topics of sexuality, contraception, and pregnancy.

However, she recalls “a lot of change in the wings”, as the vice-like grip of the Catholic Church was beginning to ease.

“For example, in 1995, there was an historic referendum which legalised divorce. Women could access the morning after pill. I had friends at school I was able to talk to about these issues – there wasn’t the same level of shame.”

McCarthy contrasts this with her “Mammy’s” extremely conservative childhood, in the “literal shadow of a massive cathedral”.

As a young woman, Carol became pregnant out of wedlock, and gave her first child up for adoption – an experience which “left a wound she carried for the rest of her life.”

“It was all so secretive – she was sent away to Dublin for most of her first pregnancy so that no one [in her hometown] would know,” McCarthy said.

“Mammy went on and had a career, raised a family, and lived a full life – but the trauma followed her around for a long time.”

The turbulent relationship both mother and daughter had with alcohol is also “a major character” in the book: while McCarthy has been sober for over a decade, Carol’s experiences were “more fraught”.

In her early 20s, McCarthy “ran away” to begin a new life halfway around the world, arriving in Auckland – a city she described as “so sparkly and clean”.

She worked in hospitality and volunteered from Auckland University radio station 95BFM – which led to her first paid role as host of an overnight talk back segment on Newstalk ZB.

“There were a lot of hours of air to fill, and people would give you feedback in real time. If you messed up, they’d be brutal.

“One person rang in and said, ‘you’re ruining this for everyone’.”

She then spent eight years as a producer and presenter for RNZ, before founding her own podcast creation company Bird of Paradise Productions, alongside her journalist husband John Daniell, in 2017. 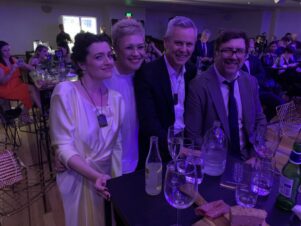 Last year, McCarthy and broadcaster and doctor-and-training Emma Espiner received a Voyager Media Award for their podcast “Getting Better”, exploring a year in the life of a Maori medical student.

In an interesting twist, McCarthy and Espiner ended up competing against their husbands in the Best Serial Podcast category – with Daniell and Guyon Espiner’s podcast “The Service” also nominated.

“Luckily, the guys were very supportive of our win!” McCarthy said.

She said writing Grand was an enjoyable, “very emotional” and ultimately healing process.

“A lot of it came out quite fast, and I’d take any free moments I had to write – I’d be making notes on my phone while Eve was watching cartoons, or while I was preparing dinner.

“My relationship with Mammy was complicated: it was volatile, and we definitely clashed. But writing the book helped me realise the depth and strength of her love for me – and that brings real comfort.”