A group of women gathered at Te Pa in Masterton on Monday, World Smokefree Day, to weave baskets to help prevent sudden unexplained death in infancy [SUDI] and send a smoke-free message. 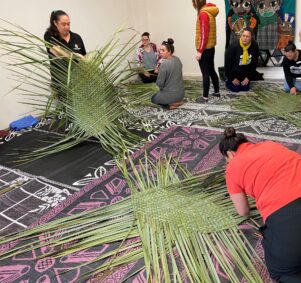 The group of about 25 met to weave wahakura [baby baskets] and learn a new skill, while sharing stories and experiences about helping keep babies safe and being smoke-free.

Master weaver and tutor Jenny Firmin presided over the day to make sure the strands were woven correctly and to give weaving advice.

Each wahakura started the day as a flax frond [whenu] and ended it as a perfectly formed oval wahakura. Weavers were paired with one or more learners and each group made a baby basket.

The group included health workers, teachers, weavers and two pregnant women. The programme started with introductions and an explanation of the process, followed by weaving the baskets. Each basket was expected to take about four hours to finish.

Selby-Law said it was important to prevent SUDI. Many parents shared beds with their babies, which presented risks.

“It’s human nature to have our babies as close to us as possible.

“That’s a risk for SUDI. It’s a suffocation risk. The idea is that by having this baby bed inside a parents bed, it provides a wall that reminds the parents there is somebody else in the bed with them who is vulnerable.

She said if the baby were in the wahakura, it would help stop parents rolling on to their young babies in their sleep.

“This is an opportunity to talk to our parents about all the good things,” she said.

“This is environmentally friendly. It comes from Papatuanuku [mother earth] and it goes back to Papatuanuku. It’s based on Te Ao Maori and that’s really important too.”

The introduction of beds had increased risks that had not existed before, because they were soft.

Maori were more affected by SUDI than non-Maori, because of over-arching health determinants including poverty, housing and smoking.

“If you look at health, and the determinants of health, Maori are on the wrong side of it. It’s part of colonisation,” she said.

Firmin was there to help educate health professionals to understand the process of wahakura.

“Wahakura is the place we lay our most precious taonga. What is the greatest taonga we have? It is our people,” she said. 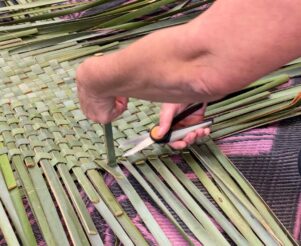 Firmin said many years ago babies would simply lie on the floor.

“We didn’t have a lot of SUDI back then. SUDI came when we started sleeping in beds.”

She grew up weaving, but went to her first wananga [learning group] about wahakura in Levin in 2013. A weaver from Gisborne had spoken about how babies could be protected and said weavers had a responsibility and a skill that needed to be shared.

“We need to use that responsibility and that skill to help stop SUDI. This was the lightbulb moment. I felt it in my heart.

“I went home and the first thing I did was teach my class how to weave wahakura. Since then, it’s grown. I’ve also refined the process to make it easier,” she said.

Firmin is not a smoker but would be discussing the safe-sleep messages and the smoke-free messages with people as they wove, as this was part of the process.

“We talk about our intentions, our purpose and our moemoea [dreams] as we work,” she said.

Spence said SUDI and being smoke-free went hand in hand.

“The baby should be smoke-free, breast-fed, face-up and face clear. There should be no toys or other things around the baby,” she said.

“It’s World Smoke-Free day and we wanted to do something special. In the old days, we’d stand on the street and give out lip balms,” she said.

Spence said the event was about highlighting the issues and using the opportunity to raise awareness of the benefits of being smoke-free.

World Smokefree Day is celebrated annually. The theme for 2021 is ‘Commit to Quit’.