Many Wairarapa farmers rely on the Masterton Saleyards to sell their livestock, but with continued closure after covid-19, farmers have not been able to use the yards. GRACE PRIOR met PGG Wrightson and Carrfields representatives to find out why the yards are still not operational.

Masterton Saleyards shut down through covid-19 and has stayed closed due to its loss of resource consent for wastewater ever since, PGG Wrightson livestock manager Steven Wilkinson said.

The stockyard, on Norfolk Rd, is co-owned by Carrfields and PGG Wrightson and is where most of the livestock in Wairarapa is auctioned.

Wilkinson said they had been working through the process of getting a new wastewater plan in place, and work started this week.

“The decision was made to go the whole hog on the yards and upgrade things like the earthquake strengthening on the rostrum, health and safety upgrades, fire exit upgrades to future proof them,” Wilkinson said. 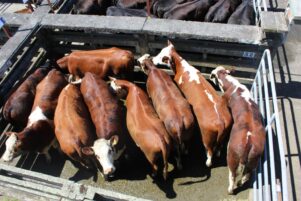 The yard usually hold about 8000 cattle a year for sale. PHOTOS/FILE

The yard usually holds about 80,000 sheep and 8000 cattle a year for sale, Wilkinson said.

Wilkinson said they were still moving stock “either through other sale yards either in Fielding or Hastings or shifting directly from farmer to farmer”.

Carrfields livestock representative Carey Ashwell said the logistics for selling stock was tough, that it was difficult moving stock for anywhere other than the yard and around Wairarapa.

Wilkinson said the upgrades were costing about $800,000.

Wilkinson hoped the yard would be open and running by early next year.

“It’s a fairly complex operation; we’re committed to keeping the yards open for the farmers locally to be able to use,” Wilkinson said. Wilkinson said the closure of the yards was a struggle, “even from here out to the South Wairarapa coast, stock have already been on the truck for two hours by the time they get here, so we need these yards operational rather than sending stock further afield”.

Ashwell said they were able to sell and find homes for stock, “but it’s good to have them in front of buyers and create a bit of competition for them”.

“Problems with stock placement tend to be more seasonal; we’re lucky this year that it has gone the way it has,” Ashwell said.

“If we’d had a bit of a drought and the sale yards weren’t operating, it’d be a bit of a double whammy.

“This year we have good feed levels around Wairarapa, so it’s been a bit of a relief for farmers.”

Wilkinson said they have had to make some sacrifices in yard size to find a workable solution and keep the yard open, but he hoped the same number of stock would be coming though once they were operational again.

“There is quite a bit of unutilised yarding through the middle so it’ll make space for the wastewater plant,” Ashwell said.

“We might have lost 20 per cent of our yarding, but we are rearranging some of this area so the overall effect will be minor,” Wilkinson said.

Wilkinson said the yard was a hotspot for selling stock where farmers could make a decent amount of money at auction.

“We attract outside buyers, and they come for the Wairarapa stock.

“They specifically want Wairarapa lambs or cattle because they shift well to the finishing regions; so it’s a good chance for the farmer clients to show off their production – what they’ve spent a year making and breeding and growing,” Wilkinson said.

Wilkinson said the yard allowed farmers to “get it in front of the people and get well rewarded for it”.

“It has been a lengthy process to get the yards back open again, but we’ve got the words started, and the capital approved so it’s just a matter of getting the work done and opening again.”