Alan De La Mare, of Masterton, has written a book about his 50-year career as a nurse. PHOTOS/SUPPLIED

Alan De La Mare had worked 32 jobs before finally finding his calling as a nurse at age 22.

Since then, he has enjoyed a varied 50-year career in a profession that wasn’t quite ready for men when he entered it.

“The attitude at the time was it was a women’s profession – we were an anomaly, there was no place for us there.”

This outdated viewpoint has inspired the title of Alan’s newly published book, Hands behind your back – just watch! Life as a male nurse.

The book details his experiences in the health sector, with short stories and an overarching narrative.

Now 72, Alan, who moved to Wairarapa two years ago, said becoming a nurse wasn’t his idea.

“I was working as a care assistant at Hutt Hospital and there was a phone call to the ward asking me to go down and see the matron.

“At the time, the matron was the goddess of the hospital – they had total control, and everybody bowed and scraped – it was so hierarchal it wasn’t funny.

“I fronted up to her.

“The Wellington matron had told the Hutt matron that they had a male nurse starting and Hutt wanted to beat this [and get a male nurse first].” 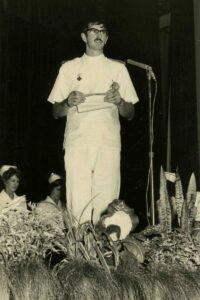 Alan De La Mare giving a speech at his 1972 graduation from the Hutt Hospital School of Nursing.

The matron said Alan was the man for the job, and in 1972, after starting hospital-based training in 1969, he graduated from the Hutt Hospital School of Nursing.

Alan said he had been the first male nurse to train in the Wellington region in 27 years.

Much of his time nursing has been spent working in emergency departments.

But Alan’s career has been very diverse.

He was a field medic in the territorials for 13 years, and he worked at Avalon Studios on the set of Worzel Gummidge as a first aider and location assistant, as well as a stand-in for Jon Pertwee who starred in the programme’s title role.

“They utilised me for all they could. I got on screen a couple of times – not that you’d know it – just my hands and back.

“After that, I went to work at the Porirua assembly plant for Mitsubishi Motors as an industrial nurse.”

He said it was a “reactive role”, treating injuries on site.

This role eventually evolved into health and safety and implementing processes that prevented injuries.

Alan said at one point during his career he got close to “burn out” so he took a break from the health sector to drive haulage trucks, and then vans that had been specialised for children in wheelchairs.

“Then I went back nursing. I thought, ‘I better finish my working life in the career that I like’.”

He spent about 10 years working in Wellington Hospital ED, before moving to Masterton in 2017 with his partner.

Now, he works casual hours at Wairarapa Hospital, both in ED and in-patient transfers.

Alan said things had changed for the better since he entered healthcare.

“It was a woman’s job and as a consequence there were things we were never allowed to do.”

The two main areas men were to avoid were cases involving gynaecology and maternity.

This attitude meant Alan had no practical experience before he found himself having to deliver his first baby in the back of a police car in the pouring rain.

“There was still the feeling that I’m a guy so I should stand in the corner.

“I worked hard to show senior staff that there was a place for male nurses, but it was challenged all the way through.”

And Alan said it wasn’t that long ago that he was called to cover a shift in a casual capacity in Wellington, where the charge nurse refused to let him work and asked the agency to send a woman.

“That was in 2009 when I thought attitudes would have changed,” he said, adding that the sector was far more inclusive these days.

Alan, who was also a volunteer fireman for 25 years, said nursing wasn’t for everyone, but he loved it.

Over the years he’d seen his fair share of “frequent flyers”.

Early in his career, a young boy with bad asthma was often brought into ED, “blue in the face”, by his mother.

Alan said they “worked hard and got him back” every time.

“Then I walked into a ward about 40 years later and I looked at [a patient] and looked at his name and condition.”

Alan sparked up a conversation with the man saying he remembered treating him as a baby.

“It was a special moment for us both.”

He recalled the worst time to be a nurse was during health system reforms in the 1980s.

He said patients in need of treatment were being turned away because they didn’t meet the new criteria – “they weren’t dying and didn’t have limbs falling off”.

“We turned people away with pneumonia, it was bloody difficult. A lot of staff left because of it.”

In addition to the tales included in the book [available at Almo’s Books Carterton], Alan has identified 77 more so there may be a sequel coming soon.