A car plunged 40 metres off the Masterton-Castlepoint Rd on Wednesday. PHOTOS/MARCUS ANSELM

Four young people survived a plunge down a cliff face and into a creek after their car swerved off the Masterton-Castlepoint Rd on Wednesday.

The group of three men and a woman were treated for minor injuries at Wairarapa Hospital after their car fell 40 metres down a ravine off the road, heading towards Masterton between Tauweru and Blairlogie.

Emergency services were alerted at about 4.30pm on Wednesday.

Masterton fire duty officer Mike Cornford said it appeared the driver and passengers had been picked up by a passerby.

This was later confirmed by the hospital. 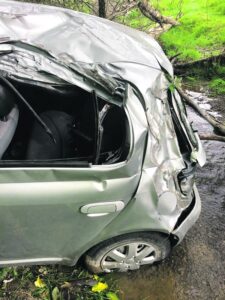 Cornford said he appreciated that a good Samaritan had helped people in distress, but emergency services should have been alerted.

Fire and ambulance officers found the car in the creek at the bottom of the cliff, but the driver and passengers had already left the scene.

“The people who took them to hospital did a good job, but it is disappointing for us that we put a lot of resources into the job, and with a little bit better information it wouldn’t have been so significant.”

The four people were being treated for minor injuries in Wairarapa Hospital on Wednesday night.