Infected hives need to be destroyed within seven days of discovery. PHOTO/JOHN GRAHAM

Beekeeper loses 32 per cent of hives

Close to 170 South Wairarapa and Upper Hutt beekeepers have found themselves in a high-risk area for American foulbrood disease after it was found in hives owned by a South Wairarapa beekeeper.

A notification was issued by The Management Agency National American Foulbrood [the agency], alerting beekeepers to the risk of infection on Wednesday afternoon.

At least 168 beekeepers with one or more apiaries have been identified in the high-risk area which covers Martinborough, Featherston, Greytown, Carterton and Upper Hutt.

American foulbrood is a highly infectious disease, so all infected hives must be reported and destroyed within seven days.

The disease is spread through bees robbing honey from infected hives and returning to their own hives, or parts of infected hives being used in other hives.

It takes from 21 days to a year for the disease to become apparent. 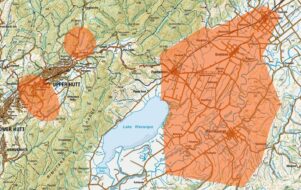 The high-risk area identified in the AFB outbreak is orange-shaded. PHOTO/SUPPLIED

The agency was made aware there was a potential problem in the area in late February this year.

Inspections were performed in early March, confirming the presence of AFB and resulting in the destruction of 275 hives.

National compliance manager for the agency Clifton King said beekeepers could manage their risk by inspecting their hives and minimising movement of hive parts between hives.

The agency monitors and audits this process to ensure beekeepers comply with their obligations.

King said there was definitely an increased risk of infection, but it could be managed by following the agency’s advice.

“This is not a threat of hailstones that is going to decimate all their hives.

“What they do need to do is follow the advice that was given in the notice. If they follow those steps, they will be able to limit the number of hives that they may lose.”

The affected South Wairarapa beekeeper has not been named due to privacy reasons but has lost 32 per cent of their hives.

They were also a signatory to the Disease Elimination Conformity Agreement, which means they agree to a code of beekeeping practice, to report and reduce AFB.

It also means they are not subject to the yearly inspections by the agency.

In response to the outbreak the agency has since revoked the beekeeper’s DECA and they are continuing to work with the beekeeper to ensure the level of AFB in their hives reduces to less than one per cent.

However, a Wairarapa beekeeper, who the Times-Age agreed not to name, said something should have been done sooner and the outbreak puts their livelihood at risk.

They said they contacted the agency in January over a suspected hive non-compliance but were told the agency was too busy to investigate.

Jane Lorimer of New Zealand Beekeeping Incorporated said beekeepers in the high-risk zone would be feeling apprehensive and the number of infected hives was concerning.

“[In response to the outbreak] the agency will be needing to do more surveillance and find out how widespread the problem is.

“Considering there is a lack in reporting, this could only be the tip of the iceberg.”

She questioned whether the agency was meeting its obligations.

“If it did, it would have picked up through its surveillance that there was a problem in the area.”

She said there needed to be an increase in education of beekeepers and what they should be looking for.