Contractors putting in the barriers on the Remutaka Hill at night during the November 2019 road closures. PHOTOS/FILE

Closures will result in safer roads

About 350 vehicles use the road from 9pm to 4am, compared with about 6300 vehicles during the day.

And while the dates are fixed, bad weather could cause the works to be cancelled – if that’s the case, then no other full closure dates will happen during this period, except in an emergency.

But the closures could spell trouble for drivers who rely on the road for overnight travel, particularly those who make transportation their livelihood.

In October last year, after the previous run of closures was announced, Darren Lightburn, chief operating officer of McCarthy Transport, a large log transportation firm based in the lower North Island, estimated the closures could cost the company up to $500,000 in revenue.

However, Pete MacLean, manager of McCarthy’s Masterton branch, said that these days, fewer trucks were going over the hill, and that the impact from these closures would be minimal.

“Last year, we were running a full night shift, right through, 24/7. But at the moment, based on the closures and the times, it doesn’t have too much of an effect on us.”

MacLean said he was pleased that NZTA had been consulting with them directly to select the most optimum times, and that a shift towards log transportation by rail meant fewer trucks on the roads.

“Our night shift finishes at 7pm these days, so the trucks need to be at the port by 7pm, and then as long as they’re back over the hill within the hour then there’s no issue.

“When the road opens at 4am, there’s no problem because the trucks are normally going over the hill after 4am.” 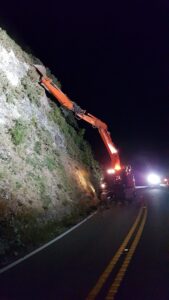 The expansion of the Masterton railyard’s logging capacity has provided opportunities for a higher volume for logs to travel on trains as opposed to trucks.

However, for smaller business owners, the closures can be problematic, preventing them from accessing the capital during the evenings.

One Masterton-resident, self-employed in the events sector, said he regularly hosted evenings in the Hutt Valley and Wellington, and returned the same night with his equipment.

“It costs me heaps most times they do it,” he said.

The Remutaka Hill road is steep, narrow, and winding, which makes it a challenging environment to work in. NZTA said that having the road fully closed to traffic was critical to ensuring the safety of crews while work was being done.

Road crews are able to complete many months’ worth of maintenance in a small number of closures, multiple crews would be able to work across the hill at the same time without causing disruption to traffic.

This significantly reduces stop/go disruptions for travellers at other times which, in the past, occurred almost daily. Access will be available for emergency services throughout the closure.

A shuttle van service can be booked in advance for night shift workers and others with essential commitments.