Facade does not need to come down

Borman wrote an open letter in yesterday’s Times-Age outlining his plans for the area.

In his letter, Borman said he could deliver his vision within the budget allocated by the last council. 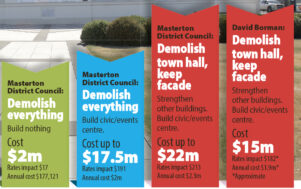 This includes demolishing the existing town hall part of the building, strengthening the other two buildings above building code, keeping the heritage listed facade, and erecting a new 900-seat civic centre at the back of the town square.

Carparks lost, would be replaced with carparks on the old town hall footprint.

“I believe a new town hall/civic centre would help to enhance the quality of life of the community especially if it is a designed building with great variety and flexibility of purpose in mind,” Borman said in the letter.

Borman strengthened the listed Times-Age building opposite the hall.

Borman said he wants to put forward a scheme as he has been contacted daily about the plans, and there was “confusion with the council survey and options not put forward”.

“Options haven’t been looked at and their costs are out,” he said.

“My own engineers have looked at buildings and given me different alternatives.

“Because I’m fielding at least 10 calls a day from the public asking what should be done, I decided I wanted to do this statement so that it made it clear what my proposal is, and it’s an option for the council to look at.”

This comes as Masterton District Council seeks ratepayers’ ideas on the precinct’s future.

The existing premises are made up of three buildings – the auditorium, municipal offices originally built in 1915, which are attached to the facade which was built in the 1950s, and an additional office block used for civil defence.

The entire site was closed in June 2016 when parts were found to be well below the new earthquake standards for buildings.

The buildings were damaged by quakes over the years, most recently the Christchurch, Seddon and Ward quakes, and 2014’s 6.2 magnitude shock centred in Eketahuna.

The council put forward three options for public comment in its current survey.

Only the third option recommends that the town’s hall’s facade built in the 1950s be retained.

“There’s confusion out there, on how the building is built and how the existing is put together, a lot of confusion over the facade,” Borman said.

“They say the facade has to come down with the rest of the building.

“But that’s not correct.”

MDC’s consultation on the project runs until February 7.