Before cutting the ribbon into the $13 million Premier Beehive factory expansion in Carterton on Thursday, Prime Minister Jacinda Ardern declared she loves bacon.

“I absolutely love bacon and am sure many, many New Zealanders are pleased this company chose to expand here when it did have other choices. Thank you,” Ardern said.

“You are Premier Beehive bacon, so the irony is not lost on me that I live in Premier House, work in a beehive, and love bacon.”

Ardern immediately acknowledged the tough road the company journeyed to get the factory built after the construction company contracted went into liquidation.

“You made it work through this speed bump and I really thank you for that,” she said.

“In terms of employment, for locals to raise their families here and have a good job is key to well-being in the regions.”

When construction came to a halt, Premier Beehive decided to engage Gary Perch to project manage and employ local companies as available.

“They let the project flow and we are grateful for this,” McKay said.

Premier Beehive’s production volumes over the past 10 years have doubled, ultimately outgrowing its production platform.

It produces more than 13,000 tonnes of product a year, employs more than 360 staff nationally and is the largest employer in Wairarapa.

“Our team members do a wonderful job and this investment is for both their and the company’s well-being and future,” McKay said.

“As an important local employer within the region, strengthening the partnership we have with our employees through improved infrastructure and staff amenities is crucial.”

All visitors to the site, including MPs Alastair Scott and Kieran McAnulty, and Masterton mayor Lyn Patterson, had to don gumboots, hair nets, and white coats, then go through a rigorous and precise cleaning process to get into the factory.

Labour list MP McAnulty said he was “really stoked” the company had expanded in Carterton.

“It shows the region’s ability to provide good staff for the company and demonstrates the faith the company has in the local community,” he said. 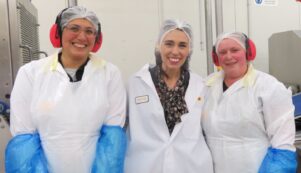 Of the 360 staff, most are on regular hours and are permanent.

More come in depending on demand.

Many older women are employed at the factory.

“These women have generally raised their families and are good employees,” Kent said.

“They are reliable, our whole team is, and the older ones bring common sense. We want to have permanent employees and hold on to their experience.

“We can offer regular and stable work, and the better we are, the more work there is.”

The staff on the floor were clearly pleased to have the prime minister at their place of work.

“It’s an exciting day for us and for our employees to have the prime minister opening the expansion and it is reflective of the work we do as a leader in the industry,” McKay said.