There are few organisations that can proudly say they’ve been going about their business for 100 years. The Masterton Art Club are one of those organisations and they celebrated their centenary on the weekend. JOHN LAZO-RON writes. 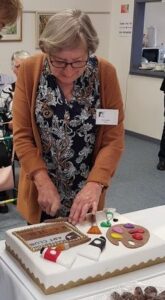 A ‘then and now’ exhibition, a display of memorabilia, and cutting of a cake is the way the Masterton Art Club celebrated turning 100 years old.

More than 120 people turned up to the milestone celebration that began at Aratoi Wairarapa Museum of Art and History on Friday night.

Masterton Mayor Lyn Patterson officially opened the night which began with a ‘Then and Now’ exhibition that displayed a collection of paintings from past and present members.

The festivities continued on Saturday at their clubrooms on Victoria St, where patron Shona Brogdan cut a cake to mark the special milestone.

Club president Elissa Smith told Midweek the club was founded in May 1921 by eight members, when it was called the Sketch Club.

Smith said the original members were quite strict about who turned up and submitted paintings but would also fine members two shillings and six pence if they did not submit a painting or sketch to exhibit.

Paintings from the ‘Then and Now’ exhibition on display at the club’s centenary at Aratoi on Friday.

She said those fines “obviously” no longer applied and that the club was in “good heart” with regular tutored classes in acrylic and watercolour painting and printmaking.

“[The celebrations] went really well and it was great to get a good turnout,” she said.

“While membership declined for a while, it has risen significantly over the last two years, which bodes well for the future.”

Smith said the milestone was significant to her because she was one of the lucky children who got to take part in the art classes ran by Aratoi’s first director Peter Tulloch, back in 1969.

“I remember kneeling on the floor painting and drawing in the old part of the gallery, and the joy I felt at being free to be creative,” she said.

“Those early classes were the beginning of my art journey.”

She went on to major in art at Wellington Teachers College and taught for many years in Upper Hutt before making the return to Masterton to take on the role she has now.

The club also had Roger Daniell speak on Friday night. Roger is the fourth son of Constance Daniell, who was a co-founder of the Masterton Sketch Club.

Smith said the club would have demonstrations and workshops at their clubrooms happening every Saturday for the rest of this month.

She said members of the public would be able to view past and present member’s works, old albums and historic records during those times.