Massive bill for a short stay in Masterton 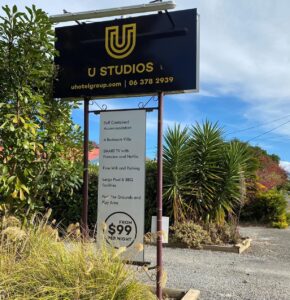 A Masterton motel has invoiced the government more than $1500 for a woman and her daughter needing emergency housing, even though they stayed less than two days.

Masterton woman Melissa O’Donnell and daughter Charlli moved into the two-bedroomed unit at U Studios in Cornwall St last Friday. Less than 24 hours later, they packed up and headed off, saying the place was filthy, the rules were draconian, and the manager intimidating.

They were given an invoice for the Ministry of Social Development [MSD] to pay, charging $210 per night for seven days for the modest rooms.

On arrival at lunchtime, after being read the rules and regulations, the pair were taken to the modest and sparsely furnished two-bedroomed unit, with a small kitchen and bathroom. Rules included no visitors at certain hours and no walking around outside in nightwear.

“She wanted to do daily inspections of the motel room to check for drug paraphernalia. I don’t do drugs,” O’Donnell said. 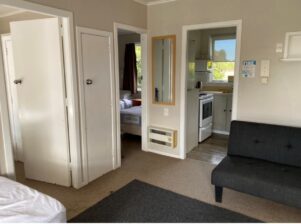 The unit where Melissa O’Donnell and her daughter stayed at U Studios.

But it was the state of the kitchen that caused the most distress.

“The kitchen was filthy. As soon as I opened the fridge it stunk. There was grime along the bottom of the fridge.

“When I put my stuff in the fridge, the freezer defrosted, and it all filled up with water. It didn’t work properly.

“The oven was disgusting and dirty. I wouldn’t cook in it.”

O’Donnell said while the place was fully equipped, it was unhygienic and grimy.

She and her daughter left the next day, although the motel manager only realised they left on Sunday. 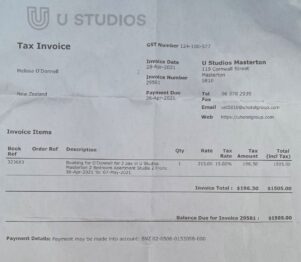 Invoice for one week’s accommodation.

O’Donnell’s aunt and uncle, Christina and Richard Dahlberg, went to the motel after realising their niece needed help.

“It wasn’t just an overnight thing, like someone had just moved out. It’s obviously got dirty over a longer-term. You don’t get things that dirty overnight,” Richard said.

“It’s got to be fair. They are charging full price. You’re not getting treated like a guest. The government shouldn’t be paying that sort of money on this.

“You should be able to look after three homeless families for that sort of money.

The U Studios manager, who declined to give her name, refused to say whether any portion of the unused seven-day accommodation bill would not be charged to the government.

She disputed the length of time the pair had stayed, saying it was two nights, not one.

In the motel unit. PHOTOS/SUPPLIED

“She handed the key to me on Sunday.”

She said getting paid more than $1500 for two nights was a matter of discussion between the government and the motel.

“It’s got nothing to do with anybody else. We’ve been on the phone with WINZ over this,” she said.

The manager said the price of $215 a night was a low rate for a two-bedroomed unit, which were often more. MSD had got a good price, she said.

“That’s actually a discounted rate averaged over a certain amount of time.”

She said the rate had dropped at the beginning of May due to low-season prices.

“It’s way less than that now. Hers just happened to still sit in that high season.”

MSD had been charged high-season rates because the pair had arrived during high season. “You go round to any other motel and ask them what they’re charging,” the manager said.

“We’re still a business and we still have to run.”

She said there were only two MSD customers staying at the motel.

“We could be full. We get approached all the time [by MSD].”

She said the accommodation industry had been hit hard by covid, with tourists, especially tour groups, no longer arriving. U Studios was no exception.

“We are not only out to make money. We are surviving.”