Dame Robin White lost her Kiribati home and studio to fire in 1996, but it didn’t stop the now Masterton-based artist continuing with her remarkable career.

She was one of five extraordinary New Zealanders chosen to receive the coveted Laureate title at the New Zealand Arts Awards in Auckland next month.

It was Dame Robin’s painting and print making skills that ensured she will be able to tick off some long-held dreams in the near future.

The Laureate Award, which comes with a prize of $50,000, is presented to someone as an investment in excellence across a range of art forms with prominence and outstanding potential for future growth.

Only five Laureate Awards are handed out each year. 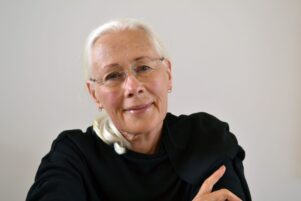 Masterton-born Jemaine Clement of Flight of the Conchords fame, will also receive one this year. He studied at Makoura College.

Dame Robin found out she had won the award a few months ago, but had to keep the news under wraps until it was officially announced.

“These decisions are made, and then you have to keep it quiet,” she said.

“It was so exciting – the Arts Foundation has its own programme of making announcements and that’s the way it works.”

Born in Te Puke in 1946, Dame Robin briefly taught art at Mana College in Porirua which soon morphed into fulltime work as an artist when she went to live on the Otago Peninsula.

By 1972, she was becoming known as one of a group of New Zealand regionalists characterised as ‘the hard-edged realists’.

After a 10-year career as a distinctive painter and screen-print maker in New Zealand, Dame Robin moved to Kiribati, where the different environment introduced some changes in the works that she produced from her studio beside the Tarawa lagoon.

Her love of Pacific culture took a new direction into collaborative art-making after a fire in 1996 unexpectedly destroyed her home and studio.

With nothing to work with and nowhere to work, she found ways to merge western art practice with Pasifika ways of getting the job done.

In 1999, she relocated with her family to Masterton, and is most recently regarded for a range of large works on tapa (known as ‘masi’ in Fiji) with the help of Tongan and Fijian collaborators and their meticulous observance of best traditional practice.

Despite her remarkable career in the industry, the award came as a shock.

“It came as a big surprise – this is not something I was expecting at all,” she said.

“It just came as a huge surprise and it was fantastic.”

Artists do not apply for these awards, but are selected by a panel independent of Arts Foundation staff and governance.

They are called out of the blue with the life-changing news they have been selected.

“The financial bonus will be an enormous help,” Dame Robin said.

She said she had always wanted to visit the Pitt Rivers Museum in England to help with her research, and now she will be able to do just that.

“I really wanted to see that – I’ve been hoping to do it for some time and now I can actually go.”

Dame Robin is the Honorary Patron of the Aratoi Regional Trust, and her achievement will be celebrated at the New Zealand Arts Awards in Auckland on November 6.