Sisters know how it is done CAPTION: Liz Barnes (left) and her sister Cheryl Hughson with Flash, one of the male alpacas PHOTO/BECKIE WILSON

If someone told sisters Cheryl and Liz 16 years ago that they would be living together and running an alpaca farm, they would not have believed them.

But after the long journey, sacrificing holidays and their homes to build up a reputation in the alpaca industry, they are now breeding their desired pedigrees.

The 11-acre block is home to about 50 alpacas bred for the local and international market.

Their goal since day one was to breed easy-to-handle alpacas that produced quality fleeces.

The pair grew up on their dad’s fruit and berry farm on Jellicoe St in Greytown. When he sold up, he kept a couple of acres for his daughters to do what they wanted with it. 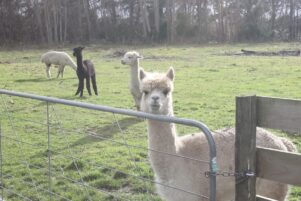 CAPTION: The Alpaca Place runs about 50 alpacas on the 11-acre block for local and international market PHOTO/BECKIE WILSON

Ms Hughson was due to receive money from shares she had invested, and was planning to head overseas, “but decided to buy an alpaca with it instead”.

After four years, the sisters decided to look for a larger block of land to expand.

“We knew we wanted to grow a herd and that the land in Greytown was not big enough.

“We decided to both sell our homes and move in together,” Ms Hughson said.

They have been at their rural Masterton property for about 12 years and are one of the biggest alpaca studs in the region, they said.

After a few years at the farm, they both left their days jobs to commit to their alpaca stud.

Mrs Barnes worked as an analyst at the DHB, and Ms Hughson worked at Wairarapa Addiction Service.

Now, the farm tours bring in the cash flow, as the selling of alpacas is sporadic, Mrs Barnes said.

One month they could sell a handful of alpacas, then nothing for a few months.

Common buyers can range from those who own a lifestyle block and want an alpaca to graze on it, or someone wanting to breed them, Mrs Barnes said.

They all have names, and are kept on the farm until they are about seven years old.

The Alpaca Place is fit with a shop selling local alpaca products, where they also run farm tours.

It is rated the number one activity to do in Masterton and were awarded a Certificate of Excellence on TripAdvisor for the second year running.

“Over the years our reputation has grown — we get mostly international visitors, people who want to get up-close,” Mrs Barnes said.

The pair also enter their alpacas in A&P shows, and national alpaca competitions. Due to the lack of information and knowledge of the animals, it was trial and error rearing the alpacas in the beginning.

But now, after 16 years, “we can talk about them until the cows come home”, Ms Hughson said.

“A lot of people said why would we want to do that, we had more faith in them than that… and we have proven it,” she said.

In the beginning, alpaca owners in the area would have gettogethers to discuss what they had learnt about the animals. This was handy as vets were not trained to care for alpacas back then, Mrs Barnes said.

Alpacas were first introduced to New Zealand by Masterton sheep farmer Ian Nelson in the 1980s. They were only found in Peru at the time, but he wanted to bring them to the country, Mrs Barnes said.

After years of battling to allow a shipment of alpacas into the country, they were finally cleared.

After 16 years, the sisters have proven that starting small on a limited budget is no barrier to success.

“It’s a great lifestyle… and it’s been a great journey,” Mrs Hughson said.