The man behind the Foureyes Foundation was in Masterton on Thursday, staring down the barrel of a plusoptix to screen the eyesight of hundreds of children.

Optometrist Ravi Dass, who runs the foundation in Wellington with his wife Stephanie Hill, travelled over the hill to screen all the pupils at Masterton Primary School.

It was the first time his eyesight screening programme had been run in Wairarapa.

Based on the data collected, some of the children tested would be referred to an optometrist.

When they heard back from the optometrist about how many of those children required spectacles, they would have a clearer picture about how effective the data was. 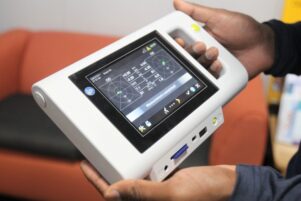 Ravi Dass showing how the plusoptix feeds back data within seconds. PHOTO/CHELSEA BOYLE

Mr Dass said helping children was something he is hugely passionate about. He wanted to make a difference.

“It’s hard to recover from that. It’s really important to pick these things up early and treat them early.”

For each set sold, another set was donated to a child from a low-decile school.

The Foureyes Foundation aimed to be there every step of the way: identifying eyesight problems, initiating follow-up eye testing, and providing spectacles and subsequent monitoring.

“We looked at running it as a charity, but the problem with that is you need funding all the time,” Mr Dass said.

By choosing to operate as a social enterprise, there was a bit more wiggle room.

Mr Dass and his wife use their garage in Hataitai as a humble office and workshop space to run the business.

This cut down on the overhead costs allowing them to pass on savings to customers while still putting their money to a good cause.

“Our customers can be a part of the journey with us,” he said.

He wanted the business to grow, reaching more schools and establishing annual eyesight screening with each.

“We see it as a community business which anyone can be a part of.”

Masterton Primary School principal Sue Walters said she was pleased the school’s students aged from five to eleven years, were being screened.

“I think it’s wonderful that they are prepared to actually go out and do this,” she said.

The school already had a vision and hearing screening with the District Health Board, she said.

“Any additional help we can get for any of our kids is great.”