Former Masterton accountant Jim Haworth had lived a completely different existence before coming to live in Wairarapa. One that involved great courage but which also cemented lifelong bonds of friendship.

Now a book, titled The Mallon Crew has been written of his and his bomber air crew crew mates experiences.

One of the great mysteries that often emerges from combat is how men and women from relatively ordinary lives can be trust into remarkable situations involving decisions of life and death, then return to civilian life almost as though the traumatic events had never happened. 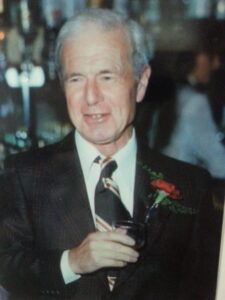 Jim Haworth, one of the Mallon Crew. PHOTO/SUPPLIED

One such man was former Masterton accountant James Randel Haworth, always known as Jim, whose exploits as a navigator in a special Lancaster bomber crew is told in a just published book.

The Mallon Crew, written by Englishman Vic Jay, tells the remarkable story of a group of men who survived the horrors of the closing stages of World War 11, including daring bombing raids in the Ruhr Valley, and of their lives since the end of that dreadful conflict.

Jim Haworth was the Mallon Crew’s navigator and, as the title suggests, the pilot was Flight Sergeant William Mallon.

The author’s father Robert Jay was the flight engineer.

The crew were attached to No.75 ( New Zealand) Squadron whose losses in personnel during the war nudged 30 per cent but remarkably the Mallon Crew survived more or less intact and Jim Haworth was able to return home unscathed, although like all servicemen who saw action he would have been affected by his experiences.

Jim Haworth had been born in South Canterbury and had qualified as an accountant prior to the war.

Having trained in Masterton he signed up and was sent to Winnipeg, Canada, to do his navigator training before joining the Mallon Crew in England, leaving behind his wife Sally and two young daughters Ruth and Maryann.

Jim Haworth was the oldest crew member being 34.

Most were in their 20s with the youngest being the rear gunner Denis Eynstone who was 19.

His letters home to his wife Sally reveal a man with a sharp wit, one not easily swayed from what he set out to do and with a healthy disrespect for over-the-top authority figures.

At war’s end Jim Haworth returned to Timaru taking up where he had left off as an accountant attached to a Ford dealership – his family was increased by one with the birth of Penny- then later moved to Waipukurau before shifting to Masterton in 1959.

Daughter Ruth Ryan, who lives in Masterton, said her dad spoke little of his wartime experiences and then only on light, peripheral things.

One of his rare wartime remarks is one of her favourite memories.

“He said when they were on a bombing mission he never looked out the window because what the eye doesn’t see the pants don’t have to worry about.”

Home in peacetime Masterton her father went to work as an accountant for Harcombe’s, later to become the vehicle dealership Wagg Harcombe.

He eventually retired but that lasted only a few weeks and he was back working as an accountant, then bought into a chartered accountancy in partnership with Don Searancke,

Away from work the one-time wartime navigator became deeply involved in athletics becoming a national judge and timekeeper for the sport and was secretary-treasurer of the Wairarapa sub-centre for years.

Her son Jamie Hunt has since represented New Zealand in yachting at the Athens Olympics in 2004.

Apart from family and athletics Jim Haworth’s other great love was horticulture, especially growing and showing chrysanthemums and he was president of the Masterton Horticultural Society for many years.

He is commemorated on a cremation plaque at Riverside Cemetery, Masterton in company with Sally, who he pre-deceased..

The just released book The Mallon Crew came about as a result of author Vic Jay making a decision in 2012 to write a blog about his father’s war-time experiences.

From there he connected with the families of the crew and made contact with Jim Haworth’s three daughters.

Boxes of letters kept by his widow were uncovered and extracts from several of them appear in the book.