Jazzing it up with the Fox When Rodger Fox was in high school in the 1960s there were only two college jazz bands in the entire country – “one at a school in Auckland and another at Mana College in Porirua”.

Now, there are at least 10 college jazz bands in Wairarapa alone.

Mojo, Fish eyes, Sforzando, The Upper Structure, and Jazz Band, are just a few of them who were tutored by Mr Fox, a senior lecturer at The New Zealand School of Music, Victoria University, in Wellington.

Music students from Wairarapa College, Chanel, Rathkeale , Kuranui, Makoura, and St Matthew’s were treated to a four-hour training session in Kurinui’s auditorium with the revered musician, who was joined by Lance Philip, head of the jazz programme at The New Zealand School of Music.

The student’s were gearing up for their performance last night – Fresh Jam – a free showcase held each year that is arranged by the Jazz in Martinborough committee.

“I find it quite rewarding,” said Mr Fox about guiding the students. 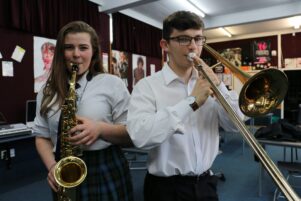 “Students end up playing in rockquest-type bands, but what they learn in a jazz band correlates to what they do in the rock groups.

“Jazz comes out of blues – all the classic bands, Rolling Stones, Led Zeppelin . . . so if you’re in a jazz band you learn to play the blues but that filters into rock.”

Mr Philip said Jazz was the root of all contemporary music that had improvisation.

He loved how jazz gave people the ability “to create on the fly”, as opposed to having to read from music.

An alto saxophone player, she had participated in several Fresh Jam events before.

“It’s really cool because you get to see the other bands interact with Rodger.

“You see them improving and then you see their finished product.”

Byron Bunny, also from Wairarapa College, and who plays the trombone, said being tutored by Rodger was a treat.

“He’s pretty much at the top of his level, helping us out who are at the school level.”

With his band, Rodger Fox Big Band, Mr Fox is heading to the United States next month for the Monterey Jazz Festival. 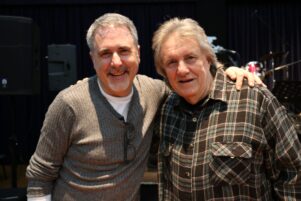