Chronically-ill former Carterton mayor and Wairarapa MP Georgina Beyer has set her sights on returning to Wairarapa- dead or alive.

The world’s first transsexual mayor  has renal failure, and if she loses her health fight, she plans to have her ashes scattered in Carterton.

The town has a special place in Ms Beyer’s heart, being the community that elected her to the mayoralty in 1995, at a time of ill-favoured societal judgement.

She was diagnosed with chronic kidney failure in 2013 and then with heart disease earlier this year.

“It isn’t all a bed of roses,” Ms Beyer said, speaking of the “tedious” 5-hour-long dialysis sessions she endures thrice-weekly, which keep her alive.

Her dialysis treatment helps control her heart condition, cardiomyopathy, which has left her heart pumping blood at “only 22 per cent”.

If her condition improves with dialysis, Ms Beyer is hopeful that she will, one day, become eligible for a kidney transplant.

And a Carterton man has stepped forward to be her donor.

“What I’m trying to get back to health for is to be eligible again for a transplant,” Ms Beyer said.

“If my donor is still willing and able.

“He’s a Wairarapa person I might add- I won’t give you his name because he wants a bit of privacy, but yeah- he’s a chap from Carterton and a friend.”

Ms Beyer recalled when the Carterton man had asked to have lunch with her in Wellington last November, just prior to her birthday.

“He offered me his kidney and I just sat there and howled,” Ms Beyer said.

Ms Beyer said until now she had not realised “how dire” the organ donation situation was in New Zealand.

“I know the organ donation thing is a bit fraught for people, but it saves lives, it certainly does, and it provides a quality of life for those a bit unfortunate,” she said.

“It’s one of the greatest gifts that anyone can offer, I think, if they feel so inclined.”

Even though she was staying positive, Ms Beyer said she was still considering “end-of-life issues” in case she died.

“I have left instructions that I want some of my ashes to be left in Carterton, but where exactly, I don’t know yet,” she said. 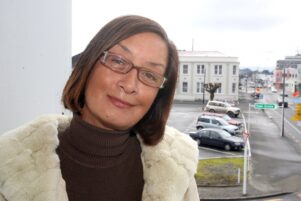 If she pulls through her ill health, Ms Beyer plans on moving back to Wairarapa.

“Ever since I’ve moved over to Wellington, which was about 2010 or so, I’ve been wanting to go back to the Wairarapa,” she said.

“My 20 odd years of living in the Wairarapa was an amazing chunk of my life.

“The people there are so close to my heart, really.”

Ms Beyer was elected as mayor of Carterton in 1995 and served in that role until 2000.

At the 1999 general election, she was selected as the Labour Party’s candidate for Wairarapa, and continued to serve as a member of parliament until 2007-  her last term as a List MP.

She had once addressed parliament saying she was a stallion that had become a gelding and then a mare (mayor).

“I suppose I do have to say that I have now found myself to become a member- so I have come full circle so to speak,” she had said.

Ms Beyer kept a close eye on this year’s local body elections and was “always interested in Wairarapa goings on”.

“Well done to Viv Napier for getting the South Wairarapa mayoralty,” she said.

“The other alternative that I heard of, John Hayes… I hope that kicked him in the butt there for a minute- thinking he can just waltz in.”

Ms Beyer said she “looked like a cyborg at the moment” because of her ongoing treatment- “doesn’t it sound gruesome”- but is keen to visit Wairarapa in the new few weeks if her treatment schedule allows.

Carterton mayor John Booth said Ms Beyer was an amazing person who had brought a new way of looking at things to Carterton.

“She always made time to talk to the council yard staff,” Mr Booth said.

“She could fly high with the eagles, but also sit down with the people at the coalface.”

“We didn’t agree on all things political, but one thing about Georgina, which she has shown on her track record as mayor of Carterton, is that she was not shy to raise matters which she thought were a concern to her community.”

“She did well for Carterton and really lifted Carterton’s profile for the time she was the mayor.”