As champion horse ‘Barack Obama’ was cantering cross country in a mammoth 160km race, his United States namesake was farewelling his presidency.

In the early hours of Saturday morning, Masterton’s Jenny Champion was on her way to winning her 10th endurance horse racing championship in Taupo.

Barack Obama, a “seasoned horse” at 19 years, proved more than up to the task in his third season of endurance racing. “He would be the oldest horse out there competing, but he goes like a ten-year-old,” Champion said.

“He has an extraordinarily low heart rate.”

“Your horse has to be really fit to even contemplate doing a 160km,” Champion said.

Setting out at 1am, the first two laps of the endurance event were raced in darkness, requiring a headlight and a great deal of concentration. 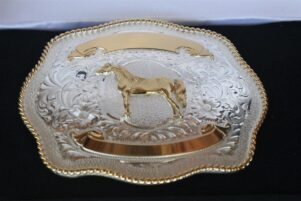 A closer look at the winner’s buckle.

Fourteen competitors started the event but roughly half that number finished it, mostly due to horses becoming lame midrace.

Champion kept a close eye over Barack during rest periods, making sure he had enough food, water and electrolytes to stay in good racing condition.

Champion said Barack’s owner, Mark Round, was really happy with that performance.

Looking back on 25 years of competitive horse racing, Champion said winning her first 160km event in 2008 was an emotional moment.

“You never think you are going to win one.”